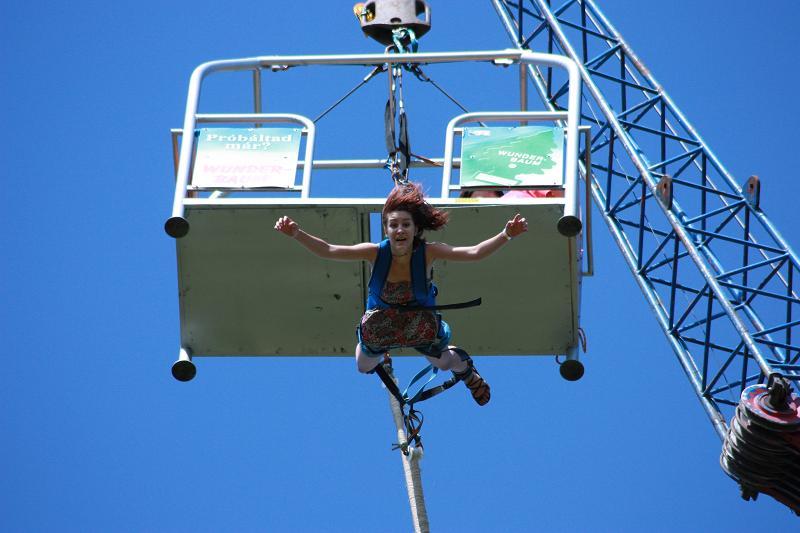 This is me, in the photo above, bungee-jumping about 11 years ago at a festival in Romania. This is also me today, live streaming my vocal practice to an unsuspecting audience on Facebook. That terror on my face… same thing.

This week I’ve set myself a challenge to stream a vocal practice I do, every day for 5 consecutive days. I’ve just finished day 1 and I’m feeling pretty energised from the adrenaline. I streamed it on Facebook and forgot to download the video straight after so today’s video might be stuck on that Zuckeberg-y platform, gah. I think having it as a daily practice can 1. help me to actually do it and 2. give me an opportunity to compare the experience and see how it changes from one day to the next. I’m using routine and repetition a lot these days to keep me going, kicking my ADHD in the face with my sexy yoga legs. Anyway, I digress…

I was a bit low energy today. I think the weather was making me a bit sleepy and unmotivated. I maybe also felt a bit low confidence, not totally convinced I can do it. I never quite know when i feel like this if i should stop and chill or if i should push myself and keep going. I guess in this particular situation I pushed myself and some of that inner dialogue maybe transpired. It always does. This is the thing about improv – it can’t be faked. If you fake it it’s shit.
Today I was trying to work on the ’trying not to please others’ bit but i still don’t think i have cracked it. There were all of these ends of phrases I was doing in a higher/lower pitch than the core note in order to colour the sound a bit. My first guess is to think i was doing that for others. My second guess is to think I was doing it for myself, because I was getting bored or feeling like I am not varying the sound enough. To be fair, it’s hard to distinguish between what is pitch and what is intonation. Sometimes you push the note harder and you slide off pitch without even noticing it. The whole point is to stay with the feeling, to release into the feeling, to allow the feeling to envelop oneself and then sing from inside of it however softly or same-y that might be – grow from within. Easier said than done but this is why it’s called ‘practice’!
Takeaways from today:
Day 3
I had a bit more fun today. I’m still quite surprised, looking back at the video, by how much I loose the note or how I’m slightly over or under and how I slide and glide into it. In the moment itself, I felt quite childish and happy. I’ve also noticed how the affordances of the piano influence my response. The piano has a sharp attack and, if I press the pedal, which I think today I did, quite a long delay. It has the potential to be quite percussive, not much long note sustain like you have on the violin for example. It gives a glimpse of the note you’re playing and you either keep pressing it and turn it into a rhythm or let it die out slowly. I don’t play the piano so there’s not much fancy manipulation of arpeggios or weird chords that I can do. In a way I feel a bit limited by this because I feel it’s there, it’s in front of me and I’m using 2% of what it can offer – particularly this electric piano we have that can’t allow for any sexy preparations. I know that for this exercise I don’t need to know more than what I already know but I can’t help but feel I end up a bit stuck in certain patterns. I also get bored of what I do and catch myself judging myself in the middle of doing it, actively trying to change it. I get bored really easily, it’s true. I mean, I’m off my ADHD pills for a couple of weeks now, I have the attention span of a cat (or is it dogs that have an even shorter one? in any case, in the order of seconds). Having said that, there were times in today’s practice when I felt interested in the feeling, interested in the sound, particularly the more rugged/distorted voice. There was a texture change I was interested in playing with that caught my attention.
Day 4

If self judgment was a muscle, mine would be a 12 pack, some sort of umbrella extension to the brain tensing every time it is brought into action (which is all the time). It’s perfectionism that has kept me from showing a lot of work or a lot of my process or doing things like this live stream. It’s a crippling nudging voice that says “you’re not good enough” over and over, never satisfied. The reason I don’t yet schedule an operation to get it removed is because it’s also what pushes me further, it gets me to exercise or to eat more healthily or to do another edit on a piece of writing, etc. But it functions on fear and shame. Fear of getting fat, fear of being mediocre, shame of not being inquisitive enough, innovative enough, original enough, ever enough. And you can see the problem – if the muscle is over-developed, when I try to use it, instead of gentle support I get Hulk-like strength that crushes everything in its path. So I’m looking for ways to chill that fucking muscle down and develop other bits in my body: care, empathy, support, trust, and use them to get me going. Eat less junk food because I’m taking care of my sexy body, be more diligent with taking notes from my sources because it’s a way to support myself further down the line in the PhD, allow myself to fail because it’s an important part of growing, etc.

In any case, it’s a process. Part of which I’ve decided to make public through these daily live videos.
I noticed in the practice today that I gave myself quite a long time to find my footing, to stay with the feeling. When you’re searching for it it’s sometimes unclear in the moment whether you’ve found it or not. I did feel a turmoil and a release towards the end but in the moment it didn’t feel that much different than the rest of the practice. Maybe I felt more carried, like I released control and responsibility without even knowing I was holding them. That’s a good metaphor – releasing something that you never knew you were holding on to.
Post live:
I sat down earlier in the week and chatted about this experiment I’m doing with my partner Tim and he told me that if he were me, he’d disable comments and likes. I said it’s fine, it’s another part of having to deal with public exposure – judgment coming from others. And it’s true, I am having to deal with it. Today someone passed a judgment before I even got a chance to do my own writing and reflecting, as I was rewatching the video. The comment was: ‘it gets good after min 10”, the whole video being 12 minutes in length. My first reaction was to agree, that 10 minute point was also the moment I noticed the release I’m talking about above and it was easy to dismiss everything that came before, bin it and keep those couple of minutes when the energy was at its peak. But then the whole journey of trying to find alternatives to shame came flooding in and I caught myself in the act. No. No way I’m gonna do this to myself again or allow someone else to do it – deem the process to get there unimportant or “not good enough”. It’s not like I’m never ever going to do it again but this is what this whole thing is about right now, stopping the hater voices and some physical person just happened to embody my own hater self so you bet they’re gonna get it.
The process is fucking important, the searching and the reflecting are valuable. I’m not sharing a finished piece of work, I am sharing, as my friend Ollie called it, an unraveling, a peak inside a journey of becoming. So I kinda lashed out and called the guy a prick, aiming to strengthen the (inner) voice that is self-compassionate and praises the courage and effort that’s put into doing it. It seemed important to make that point, even though it went quite off topic with some more boring reactionary comments…

WTF is Practice Based Research